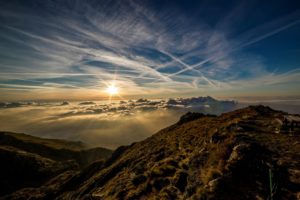 Growing up, my dad always kept a little plaster Ten Commandments on the windowsill above the kitchen sink. It was far less impressive than the stone tablets that Moses brought down from Mt. Sinai, but their message was no less intimidating. “Don’t do bad things or else God will be very disappointed!” The God of the Ten Commandments (and the rest of the 613 commandments in the Torah) was a scary God with a short temper and no patience for “funny business.” The Law was bondage. The Law was judgement. The Law was a constant reminder of how broken I was. As if having to do the dishes wasn’t bad enough!

However, now that I’m older, I see that judgement was not God’s intention at all when He carved out those tablets. God has always been in the business of rehabilitation, and this was no different. The Hebrew people were not kidnapped and sold into slavery, nor were they were not conquered and sold as slaves. The Hebrew people were conceived, incubated, born, and raised as slaves. Their cultural, ethnic, and socioeconomic identities were interwoven with their position as a nation of slaves within a nation of masters.

The Exodus changed everything. In the blink of an eye, they were no longer slaves. They were a free people marching towards their new home. That is when God meets them at Mt. Sinai and begins the long process of helping a nation of slaves learn to be independent and self-governing. God didn’t free the people from Pharaoh’s yoke just so that He could give them a new one. The Law was given to them that they might learn how to discern for themselves what is right and wrong. Everyone who has been in captivity for an extended period of time knows that transitioning back to society is much harder than it seems. Prisoners, slaves, victims of sex trafficking, and others are repeatedly fed the narrative that they are worthless and deserve whatever horrors they face. They are told when to get up, when to go to sleep, how to work, what to do, and how to speak. Without help transitioning, many people fall back into their old familiar shackles. 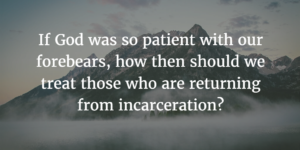 The Hebrew people sure did. When they reached Canaan, God knew that they weren’t ready and sent them back into the wilderness to grow and mature before sending them home. The entire Exodus narrative is a story about freedom, justice, rehabilitation, and a patient God who never gives up on people. If God was so patient with our forebears, how then should we treat those who are returning from incarceration? Are they not also deserving of assistance? Let us who have received God’s grace give back freely. It is not enough to set the captives free. We must help them free themselves from the shackles within as well.