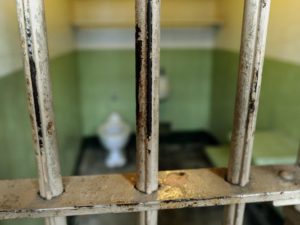 The biblical narrative of Joseph highlights the failings of a “justice” system that are still present today.

Starting in Genesis 39, there is a story about a guy named Joseph. He was his father’s favorite child, and because most of the fathers in the Bible are pretty bad at parenting, Joseph’s dad made a big show out of it, giving him an amazing technicolor dreamcoat which Joseph then flaunted in front of his brothers. His brothers were justifiably annoyed and did what everyone does when their siblings are showing off; they sold him into slavery and faked his death. So far so good. No dysfunction in this family. There’s no way that this sort of childhood could have any lasting effect on a person…

So Joseph was carted down to Egypt where he was sold to Potiphar, who was the captain of the palace guard. Joseph was only seventeen and, by no fault of his own, was stripped of his freedom and forced to labor in a foreign land for ten to fifteen years. Now, palace guards were in charge of watching over the harem, which in turn meant they had to be eunuchs. Thus, it can be guessed that Potiphar’s wife was pretty unsatisfied at home. After Joseph refused her advances enough, she got mad, falsely accused him of sexual assault, and had him locked up presumably for life. Kidnapped, stripped of his rights, falsely accused, and now imprisoned, Joseph was doing his best to just hang on until tomorrow.

Years passed in prison as he tried to make the best of his time there. He worked for the guards and made friends with his captors in hopes of being released early for good behavior.

Eventually, the Pharaoh threw his cupbearer and baker in prison because Pharaoh was having a bad day, and these things happen. Both cupbearer and baker had troubling dreams, but Joseph was able to interpret them. He told the cupbearer that he would be released in three days and Joseph pleaded that the cupbearer might talk to some people on the outside about getting him released too. Lo and behold, the man was released and once again given a spot directly next to the Pharaoh. Unfortunately, he quickly forgot about Joseph, and without an advocate on the outside, Joseph just sat in prison like so many of our poorer citizens; adrift in an uncertain sea.

Two years passed and not once did this man think to put in a good word for Joseph. Out of sight, out of mind. It wasn’t until Pharaoh had a dream and Joseph was suddenly useful did he step up and advocate for his release. After his interpretation, Pharaoh made him second in command and everyone lived happily ever after (or something like that).

This story is usually lifted up by preachers as an example of God’s faithfulness. They lift the line from Genesis 5:20 that says, “you meant evil against me, but God meant it for good” and make that the whole moral of the story, as if this was just an elaborate drama about the importance of faith. Do you know what I see when I read this story? I see a broken system of vigilante “justice” and dehumanization that treats people like animals or goods to be exploited.

Joseph came from a broken family with a long history of violence and dysfunction, and his was no exception. God may have used their malice for good, but that doesn’t erase the effect that it had on Joseph’s psyche. When Joseph was falsely accused by Potiphar’s wife, justice was denied. He was poor, he was a worker, he was a foreigner. He didn’t stand a chance against someone as powerful as Potiphar. In prison, his requests for release were ignored, and once the cupbearer had no use for him, that man forgot about Joseph as well. Joseph only regained his freedom because Pharaoh had a use for him. It wasn’t because he had intrinsic value or because justice matters. It was only because he was useful.

Yes, this is a story of God’s blessings, but it is primarily a story of our failures, and this is a story that repeats itself in every generation. The poor and the poorly connected are denied justice because it is not convenient for those in charge. A slave makes more money for their master than a free servant just as for-profit prisons and detention centers make more money for their local governments than rehabilitation programs and social services. For every one story of a Joseph, there are thousands of others who don’t make it out on top.

God can’t free every prisoner if we keep working so hard to make more! Justice must be served to all and not just to those who are “useful” to those in power. Let us strive towards the goal of perfection which God has set forth, knowing that while we will never achieve perfect justice, we can certainly improve!