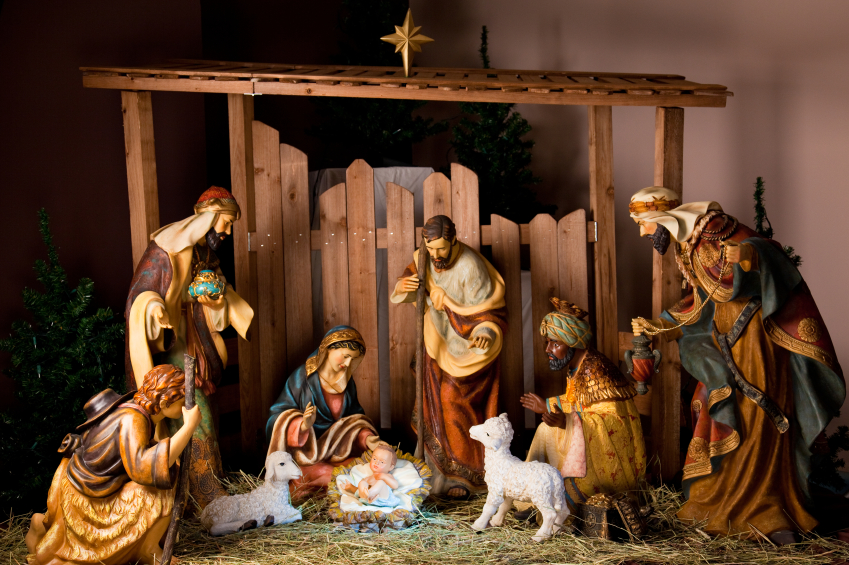 Pastoral confession time. I hate 99% of nativity sets. I hate how white everyone is. I hate how Mary never has blood on her white clothing and her hair is perfectly made. I hate how composed (and old) Joseph is. I hate that the shepherds look like they took a shower and put on their newly dry-cleaned robes before coming out. I hate that there are angels in the middle of it, giving the scene a heavenly glow. I hate that Jesus is always sleeping quietly or playfully reaching his arms out. And don’t even get me started on the Magi who were still a year or two away. I hate how clean, serene, and overwhelmingly WHITE they are. The Christmas story that fits nicely on your front yard or dining room table is a fantasy, and not even a creative fantasy. The real story is much more fantastic.

So Mary got pregnant without having sex, and the angel only bothered to inform Mary and Joseph of that important little tidbit. The rest of their friends and family were left to assume that Mary and Joseph had been messing around before their wedding day. Why else would he stand by her side? I’m pretty sure that their families disowned them after that, and they lost all their family ties. After all, Bethlehem was their ancestral city. It would have been overflowing with family members. Surely there was a cousin, an aunt, or a grandparent who would let them crash on their floor. But their families had abandoned them, and left them to sort out the consequences of their sinful sexual relationship. So they end up in a dank and stuffy cave filled with farm animals and more manure than they’d ever seen before, and Mary starts having contractions. What does Joseph know about midwifery? Probably very little, but he was an engineer, so he worked it out and after hours of excruciating pain, Jesus was born screaming and bloody. There were no doctors there to clean him up or nurses to take care of Mary. Just a couple of scared teenagers, far from home, and separated from their families.

After it was all over, everyone was exhausted, and they drifted off to a well-deserved nap when they were awoken by a bunch of strange men, covered in dirt and bundled up in patchwork coats. Shepherds rarely came into town because they were unclean (both ritually and literally), and they were usually social outcasts as well. Criminals, immigrants, and the mentally unstable had very few employment opportunities in the cities, so they spent their days out in the fields with the animals. But they ventured into the crowded city because the angel had told them the big secret that only Mary and Joseph knew. There was a baby, wrapped in rags, sleeping in a feeding trough, and he is the king of the world. A week later, when Mary and Joseph presented him at the Temple, two elderly people, Simeon and Anna, were led to recognize who he was, but no one else in that great holy city.

Like any good story, it’s a slow reveal. The angel doesn’t assemble the religious leaders, or the business leaders, or the educated leaders, or even the government. God’s messenger stays silent and gives these teenagers a few years to figure out what they’re doing. THAT’S when the Magi see a very special star rising and proceed to Bethlehem to honor the king that was born. Now, remember, these weren’t Jewish scholars. They were Zoroastrian astrologers practicing the “forbidden arts”. The star that they saw was not obvious to the untrained eye, unlike what the nativity sets would have you believe. It was so obscure that they were the only ones who noticed it. Foreigners who practiced a foreign religion and spoke a foreign language. They got it.

So to recap…
Two teenagers, bloody, exhausted, and alone.
A group of socially repugnant migrant workers.
An old man.
A widow.
Foreign practitioners of a forbidden religion.

All of them confused. Most of them ragged. None of them European.

I want to see that nativity set because I think that we all need to be reminded that Jesus was not born to a respectable middle class white family in the suburbs. He was born on the fringes and is still being born there today. Bow before your undignified King, born in the gutter and raised in the projects. Hail Mary, full of the naive hope of a teenager with nothing to lose. Hark, the herald angels are singing in the bodegas, the street corners, the group homes, and the shelters. Will we hear them?