What I Took from ‘The New Jim Crow’ 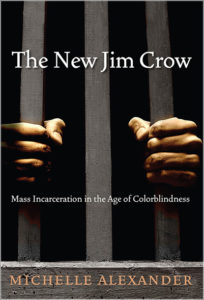 Did you think that Jim Crow ended in 1965 with the Voting Rights Act? Think again. Michelle Alexander argues in The New Jim Crow: Mass Incarceration in the Age of Colorblindness that racism is so pernicious that it doesn’t go away. It just changes form.

In this book, Alexander traces US racism from slavery until today, connecting the dots between slavery, Jim Crow laws, the War on Drugs, and today’s mass incarceration of African Americans. She explains the history and mechanics of how mass incarceration is a “comprehensive and well-disguised system of racialized social control that functions in a manner strikingly similar to Jim Crow.”

The book is divided into six chapters. Chapter one explains how racism has changed forms over the last few centuries. Chapter two speaks to the importance of the War on Drugs. Chapter three explains the role of race in the criminal justice system, and chapter four dissects in great detail the effects of post-prison discrimination. These first four chapters provide an understanding as to how mass incarceration functions similar to Jim Crow laws, which is the theme of chapter five. The final chapter discusses the dangers of being colorblind in the work to end mass incarceration. 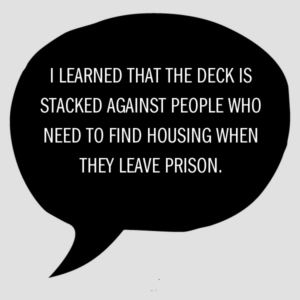 When I first heard about this book, I was reluctant to read it because I thought that I already understood the problem. However, in reading it I realized how little I actually knew, especially regarding the history of the factors that have led to mass incarceration of African Americans, and how to begin dismantling it. I read the book as part of a study group with people from my church, West Philadelphia Mennonite Fellowship. During one of the study sessions, a prison chaplain joined us, and during another, a man who’d been incarcerated came to the study. He is currently working to help men who are coming out of prison to put their sense of self back together, find housing and employment, and re-enter society. Both men shared about their experiences with the prison system with the group. I learned that the deck is stacked against people who need to find housing when they leave prison. I have a cousin who spent twenty years in and out of prison, so I appreciate how hard it is to find work, but I had no idea that even finding suitable housing can be near impossible.

I feel blessed to be able to help Redemption Housing as it launches, and I plan to participate in whatever ways I can—cooking and eating with the men, offering literacy classes, sharing conversation and cups of coffee. Have you considered signing up to join me in volunteering? There are many opportunities available.

What I learned from The New Jim Crow and the group study I participated in will be lessons that I will carry with me into my work with Redemption Housing.

has a Bachelors degree in Spanish and a Masters in education from SUNY-Binghamton and Temple, respectively. She teaches ESL (English as a Second Language) to college-bound students at Temple. She volunteers at an after-school homework program at the elementary school across the street from her house. She loves growing vegetables in her backyard and trading her produce with neighbors.