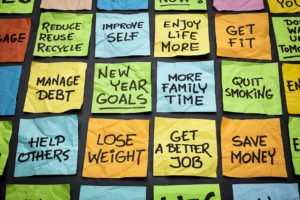 I’ve never been very good at making (or keeping) New Year’s resolutions. I have some vague goals, but they are generally not specific to a new year, and tend to be goals I set throughout the year. I don’t know, I just do not really like New Year’s goals.

I mean, the change of year signifies a passage of time, but December 31st is almost exactly the same as January 1st. The weather may be a little different, but generally, they are the same. Not a whole lot changes. In a way, it’s kind of like birthdays as I’ve gotten older: I didn’t feel any different the day I turned 29 than the last day that I was 28. In addition, if I did not do something for the last 365 days, why would that suddenly change?

My somewhat pessimistic point of view does contrast, however, with a God that promises the daily opportunity for redemption and mercy. Lamentations 3:22-23 reads:

Because of the Lord’s great love we are not consumed,
for his compassions never fail.
They are new every morning;
great is your faithfulness.

Maybe, just maybe, I struggle with making and keeping New Year’s resolutions because I am in need of daily mercy and a constant fresh start. I shower every morning mostly because it helps me wake up, but it also feels like a fresh start. Whatever I did the day before, both in success and in failure, do not have to rule my day.

Taking it deeper, I have this nagging issue with grace. It is completely unfair. My strong feelings of justice get in the way of opening myself up to daily grace. If I cause a break in relationship (sin) with God, it does not seem fair that forgiveness is available as soon as I ask. I find myself often giving God a little bit of separation that He has never asked for because I lack the forgiveness that God exudes in abundance.

If I am honest, I want there to be some sort of punishment for those who hurt me. Even with those I love most, I still need a little bit of space because that seems fair (admittedly, I am usually at least equally responsible if not more for that break in relationship). You hurt me and this is the punishment. It is difficult for me to overcome that with God.

Maybe my New Year’s resolution (in addition to trying to eat better) will be striving to accept God’s grace on a daily basis because his mercy really is new every morning.

Looking for ways to live our God’s forgiveness this year? Consider volunteering with or donating to Redemption Housing.

Jordan Kauffman serves on the Advisory Board for Redemption Housing and is the Executive Director at New Person Ministries, a Christ-centered halfway house based out of Reading, PA.