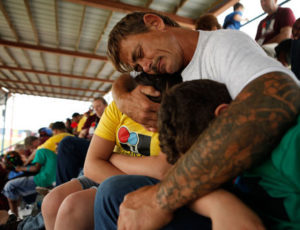 Returning to the community from prison is a difficult process for ex-offenders as well as for the families and communities they return to. Upon reentering society, the formerly incarcerated person might struggle with a lingering addiction, a lack of education and job skills, or the inability to find sufficient employment and affordable housing. And more deeply, that person will need to work at restoring relationships with family, friends, ex-employers, and if possible, the victims of his or her criminal activity. Such a transition is not easily nor quickly accomplished. And this move back into the community is especially daunting when the ex-offender faces such a process alone.

Yet, for those on the other side, thinking about connecting with a former inmate is daunting; unless you have personally experienced incarceration or had a family member or friend end up in jail, it’s difficult to understand the challenges the former prisoner faces as he strives to reenter society. Reorienting to the demands of community requires time and, ideally, the support of Christians who respond as ones who have been shown grace and who desire to tangibly love all, including returning citizens. After all, Christians follow the Trinitarian God who, by definition, embodies relationship in the godhead: Father, Son, and Holy Spirit! Those who follow God, then, should be especially interested in modeling the God of relationship by cultivating rapport with returning citizens and helping them reconnect with other positive influences in the community.

Too often the Church has distanced itself from relationship with former prisoners and failed the test Sen. Hubert H. Humphrey gave government when he said this:

Shouldn’t the Church expect to do a better job of loving these marginalized individuals than the government, assuming we can include former prisoners and those experiencing homelessness and addiction as in the same ‘shadows’? Even Jesus had to remind His followers of the need to remember ‘the stranger, the unclothed, the sick and those in prison’ (Matthew 25:34-36), as the ostracized in our society are so often not given priority!

One way the Church is moving is through Redemption Housing’s Barnabas House, which provides a safe, welcoming, and proactive place for a returning citizen to reconnect with the community through tangible aid, transitional housing, and help at gaining long-term employment and permanent housing. But more important than what the Barnabas House provides is how such support is provided. The Barnabas House ministers through cultivating a relationship with the ex-offender while he is ‘still a long way off,’ establishing a redemptive relationship with him, and then walking with him as he takes steps to reintegrate into the community.

Steve lives in Lititz, PA and is married to Kerry; they are parents of two daughters. He serves as the Director of Programs at Sunday Breakfast Rescue Mission, Philadelphia, PA and has worked with the urban poor, addicted, and homeless since 1979. He is a graduate of Lancaster Bible College (BS) and Millersville University of PA (M.Ed.).